Between the 14th of June and the 15th of July this year, the entire attention of the world’s football fans will be turned towards Russia, for the 2018 edition of the World Cup.

The legendary tournament which takes place every 4 years is set to crown another winner – will Germany be able to defend their title or will we see a different nation rising all the way to the top?

There are a lot of questions, opinions, and ideas, but one thing is clear for everyone: it’s going to be a great competition and surely one of this summer’s highlights.

But the World Cup is an especially unique opportunity for a different category of people as well: football bettors.

Usually, events like these clump up their attention and their power to analyze games, as money is thrown on all kinds of bets, from outright ones to crazy ideas, like how many shirts will get taken off or how many fans will enter the playing ground.

There are a few reasons why the World Cup is an awesome event for football betting enthusiasts:

– The wealth of information really is like no other. Everyone’s eyes will be peaked on the games, meaning that we’ll see lots of analysis of what is going good or bad for each team. Consequently, making informed decisions about your bets becomes that much easier.

– Bookmakers will fight for customer’s attention, meaning that you’ll find more promotions and bonuses than ever before. If there ever was a time to open a new account at your new betting sites, the World Cup is surely it.

– Games can be watched on an almost daily basis. Sometimes it’s hard to watch all teams during the regular season and be kept up-to-date on their form, their injury list and other such things. Since the games will take up most of the world’s attention, you won’t have this issue with the World Cup.

– Surprizes are a lot fewer. Due to the (usually) large difference in value between different teams, you won’t find as many surprises as during club competitions. Also, styles differ quite a lot between teams, so special bets like number of goals or cards are also easier to place.

Also, if match betting isn’t your cup of tea, there are so many more ways to take advantage of the FIFA World Cup. For example, if you’re not into football betting at all, you might want to put some money on your favorite team (or your national team, if they qualified) that they’ll win the entire competition.

Sure, you won’t win a lot if you want to back Germany, Brazil or France, but a surprise win from Belgium, England or other second or third tier teams can bring you a nice profit. Furthermore, lots of people prefer betting on which teams can qualify from their groups, as this leaves lots of results open. A strong team can either storm the group by winning all 3 games, or have a less impactful performance and finish with 5 points, but still qualifying for the knockout stages.

And last but not least, there are other options for World Cup betting: how far a particular team will go (for example, England to the quarter-finals seems like a no-brainer, isn’t it), how many goals a team will score, and many others, before moving towards the individual-related bets. There, you can bet on who will be the best player in the competition or who will score the most goals, as well as other more niche-like options.

All in all, be sure that outright match betting is not the only thing which can make the World Cup enjoyable – there are so many more options, and we’ve only presented a few.

Of course, we really wouldn’t be a football betting site if we didn’t present our (humble) opinion of which teams you should look out for during World Cup 2018. Here they are, divided into 3 categories, plus an extra one for the top goalscorers:

The Favourites – In Order Of Their Outright Odds To Win

Brazil – 4/1. A fairly weird second place choice for us, as we don’t agree that they’re necessarily that strong at this moment in time. Bookmakers and fans all around the world, however, place Brazil second in their lists of powerful nations. Neymar is set to make a great tournament, and the team has been built around him. He moved away from Barcelona to escape Messi’s shadow and become a leader on his own – will he be able to prove himself during the World Cup?

Germany – 9/2. The reigning champions are the current top pick for most bookmakers and fans, although their squad has suffered quite a few changes since their last successful campaign. Certain footballers like Muller, Neuer, Hummels or Ozil will certainly take the leadership positions this year and try to lead the team to another trophy.

The general consensus is that the Germans will do very well during the group stages and even during the knockout rounds, and they truly will be the team to beat. They were the first Europeans to qualify for the World Cup, and they’ll surely be eager to show us why.

Spain – 6/1. Maybe not as flashy or as obviously powerful as other years, but still a force to be reckoned with.

Xavi, Villa, and Torres are now part of history, and Isco, Morata and Koke want trophies to their name as well. They were quite impressive during qualifiers and can dominate any team in the world on a good day.

France – 13/2. Easily the strongest squad on paper, with the best depth and overall options in every position. They just have so many incredible footballers who have been playing together for a good number of years and nearly won Euro 2016 – a competition which most critics thought they deserved to win. They even beat Germany in the semi-finals of that tournament, which tells us a lot about their power.

The rest of the team is full of stars which don’t quite work well together at the moment, a fairly obvious statement given their less ideal qualification route. Still, a strong team which reached the final 4 years ago.

Some call it luck, other experience, or even pedigree – either way, these teams haven’t known World Cup glory for quite some time, and they’ll most likely end up exiting the tournament during the quarter-finals or semis.

Every tournament has its underdogs, and the World Cup certainly has its own. There are some teams which are either complete debutants, playing on the world’s biggest footballing stage for the first time or are straight up weak teams. We won’t go into lots of details as it seems counter-productive since these teams will more than likely just exit the competition during the group stage. 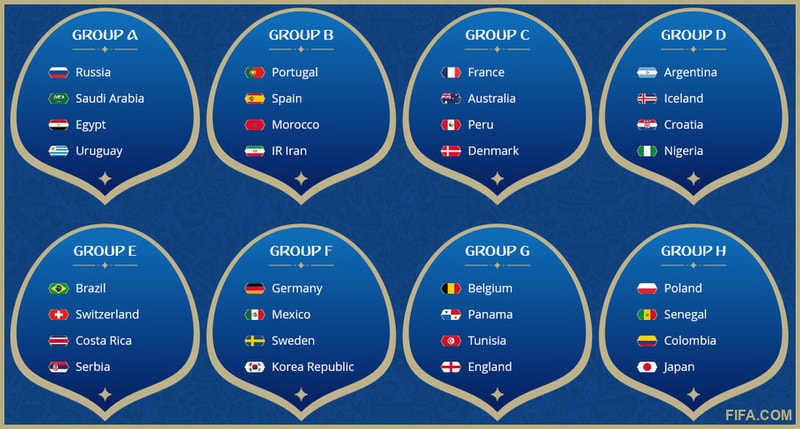 Speaking about the groups, we’re happy to say that this year’s draw is very balanced. Of course, we have our ideas how each group will unfold, which we also want to share.

Starting things off, we believe that Group A lacks a clear winner, and we’ll see a showdown between Russia – 1/3, Egypt and Uruguay – 1/5 for the first two spots, with the home nation most probably occupying one of them.

Group B is much clearer, with Spain – 1/16 and Portugal – 2/9 progressing there hand-in-hand, although their direct match will be a very interesting one.

In Group C, we favour Denmark – 8/13 in their fight with Peru for second place, since France – 1/20 will most likely win all three games and Australia should consider themselves lucky to win a single point.

Group D, however, is a different story: although Argentina – 1/7 is favourites to win, all the other teams have a good chance of getting second place. Croatia – 1/2 has an upper hand over Iceland – 11/4, but the Nordics have shown what they’re capable of during Euro 2016.

Moving on to the other 4 groups, we see Brazil – 1/16 leading Group E, with Switzerland – 1/1 in the lead for second place in front of Serbia and minnows Costa Rica – 7/2.

Typically, the longer a team stays in the competition, the better chances their players have of winning the top goalscorer award. The favourites for the trophy are, in descending order:

These are the bookmaker’s predictions, which are surprising for us from a couple of perspectives. First off, we don’t back Portugal to do particularly well, so we don’t expect Ronaldo to go bonkers during the tournament, especially since he has a tough group match against Spain.

Additionally, we expect Timo Werner to do a lot better since he’ll be the main striker Germany will rely on. The others are pretty self-explanatory – one big advantage the first four have over the rest is that they also hit penalties for their teams. Werner, Lukaku, and Kane do not.

At the end of the day, we’re glad we had the choice to shed some light on how we think the World Cup will look this year. We’re sure we got a lot of stuff wrong, but that’s the beauty of football – it’s unpredictable, surprising and brings joy to players and fans alike. The competition will be everything we dreamed of and then some, and we’re also prepared to place money on it. By then, we’ll make sure to choose the right betting site for our betting efforts. More on that later.

The odds are presented at the time of writing, please check them with the respective bookmaker.
*Terms & Conditions apply to all betting offers and sign-up promotions.